IMO/Chile agreement to expand capacity building in the Caribbean

IMO has signed a new Memorandum of Understanding (MoU) with the Republic of Chile, to extend Chile’s technical assistance to countries in the Caribbean region, in addition to Latin America. The MoU on Technical Cooperation, signed by the Directorate General of Maritime Territory and Merchant Marine (DIRECTEMAR) of the Republic of Chile, replaces earlier MoUs (signed in 2002 and 2005) and strengthens the collaboration between IMO and DIRECTEMAR for the provision of technical assistance in the Latin America and the Caribbean Region. This will particularly support the provision of experts (including Spanish-speaking experts) to deliver training in Latin America and the Caribbean. 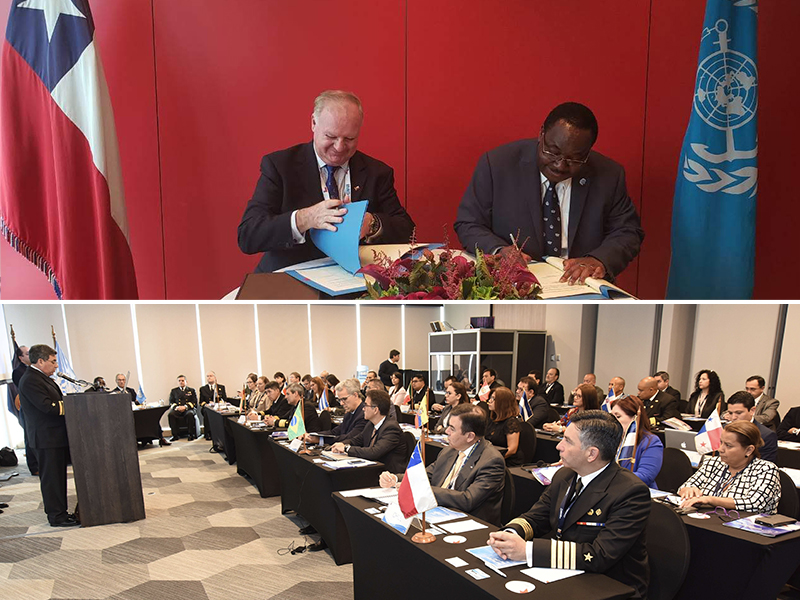 Examples of IMO training supported by DIRECTEMAR include the provisions of expert for a needs assessment mission in Colombia for the effective implementation of its search and rescue plan (April 2019); a regional workshop to raise awareness of the UN 2030 Agenda and ensure that the maritime sector is fully integrated into the United Nations Development Assistance Framework (UNDAF), which is the main platform for the collaboration of the UN system at country level (Chile, October 2018, pictured below)); the provision of an expert for the delivery of a regional workshop on the general principles of drafting maritime legislation to implement IMO Conventions, to be held in Guayaquil, Ecuador (5-9 August 2019); and a planned workshop on the ratification and implementation of IMO’s air pollution and energy efficiency regulations (MARPOL Annex VI), to be held in Viña del Mar, Chile (30 September-2 October 2019). The new MoU with DIRECTEMAR will help ensure further similar activities are supported in the Caribbean, as well as in Latin America.

Norman’s agenda in Chile was organized by the Embassy and the Santiago office of the Department for International Trade (DIT).

The minister met with President Sebastián Piñera, they exchanged views about the relations between the two countries and set the tone for this year’s extensive UK-Chile engagements.

While in the country, Jesse Norman also had the opportunity to call on senior Chilean Government authorities including: Susana Jiménez, Minister of Energy; Gloria Hutt, Minister of Transport and Telecommunications; Carolina Schmidt, Minister of the Environment and Louis de Grange, President of Metro S.A.

The main topics covered during Mr Norman’s meetings with Chilean senior authorities were cleaner urban transport, follow-up from COP25 bilateral meetings, electro-mobility, large-scale sports events, and opportunities where both countries can collaborate in these areas.

When meeting Minister Gloria Hutt, Minister Norman acknowledged the Chilean delegation that participated in the UK’s Zero Emission Vehicle Summit and where the Minister’s Chief of Cabinet was one of the delegates.

Mr. Norman also met with the British business community to discuss how business operates in Chile and to listen to their views including the effect of BREXIT on trade between the UK and Chile.–MercoPress

SANTIAGO – In the framework of the Meeting of Presidents of South America 2019, President Sebastián Piñera on Friday received his Argentine counterpart Mauricio Macri at the La Moneda Palace, where they celebrated the approval of the Agreement of Economic Complementation that prevails between the countries of the Common Market of the South (Mercosur) and Chile.

“It will allow us to integrate our countries in greater depth, with greater speed and generate mutual benefits for both peoples,” said Piñera in a joint statement with Mauricio Macri.

The agreement promotes the exchange of goods, services, and investments and eliminates roaming so that connectivity between both countries is more expeditious. In addition, it protects and strengthens the role of women in international trade, with practices to guarantee gender equality, in addition to enhancing bilateral trade by updating regulations and standards, in order to grant legal certainty to importers and exporters of both countries.

On the other hand, the agreement includes a special chapter so that SMEs can participate in public procurement tenders of both countries.

“This is one of the deepest agreements, but it was also achieved in a record time, which reflects that when there is political will, when there is a coincidence in visions of the future, when we have good will, there is nothing that can stop a greater integration between two countries and two sister nations such as Argentina and Chile,” said President Piñera.

1
Hi, can I help you? Please click on the arrow to continue.
Powered by